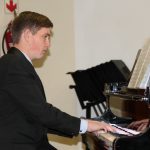 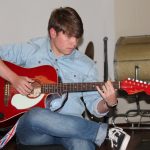 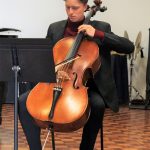 The final IEB Matric Music practical examinations took place recently. Despite the pressure of such an early kick start to the exam season, the students acquitted themselves very well and all of them walked away with an A-symbol! On Wednesday evening the Matric Subject Music pupils performed their final examination programmes to great acclaim by an enthusiastic audience in the D.R. Wynne Music School auditorium. Normally this concert would take place before the exam to help them prepare, but this year it was instead a celebration of their success.

Kieron Baart (Piano) took to the stage and began with a well-modulated rendition of a Handel Allemande. This was followed by a languid piece of movie music from ‘Lord of the Rings’ which had the audience sighing in contentment at the warmth of the Fellowship of the Ring. His final piece was his own composition, A Thousand Words, which clearly demonstrated Kieron’s propensity for creativity.

Sean Howard (Electric Guitar) arrived on stage with a charming disregard for formal concert etiquette! This charismatic young musician began by setting up an elegant groove in Signe by Eric Clapton. His delivery of Antonio Carlos Jobim’s Wave was remarkable in its effortless virtuosity. By the time he ended, he had the audience eating out of his hand.

The final performer for the evening was Daniel Erasmus (Cello). From the very first phrase of Kol Nidre by Max Bruch, he had the audience relaxed and enjoying the emotionally charged music because Daniel was in total control. This seductively beautiful first piece was followed by a crisp and driving Allegro first movement from Haydn’s Cello Concert in C Major. Daniel’s performance left everybody present with the clear impression that he is a musical force to be reckoned with!

The concert was a great success and the students proved beyond any shadow of a doubt that they have been diligent in their preparation and richly deserve their excellent exam results. They deserve our congratulations as do their teachers. We wish them well for the rest of their examinations.