Designer in Residence and visit by Stellenbosch Academy 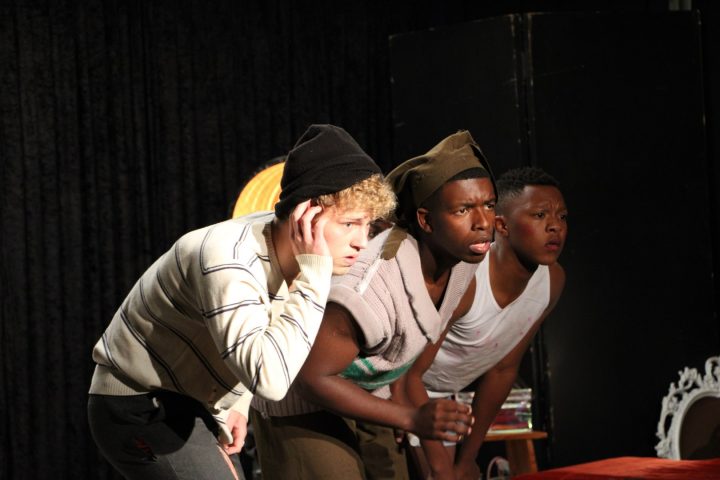 The fourth annual DSG Play Festival was held early in June. The festival celebrates excellence in drama and encourages work by students for students. The festival has grown from a version of Inter-House plays to a fully-fledged festival, including students from every grade across both campuses. Each year the Drama Department aims to grow the festival by including extra participants or adding an extra dimension to the festival. In the second year of the festival, we included St Andrew’s College performers and in the third year, St Andrew’s directors were invited to stage a play. This year the Grade 11 Dramatic Arts’ class were fortunate
enough to be involved in the TheatreLink programme; an international playwriting exchange programme, run by the Manhattan Theatre Club in New York. This six month programme involves writing an original script, sending it to a school in the USA and receiving a play for performance from another school. The production of the plays that are sent and received are then live streamed for viewing by the partner schools.

Humansville, written by the Grade 11 Dramatic Arts’ students was sent to Spotswood High School in New Jersey and  their production of Humansville was watch on 9 June. As the class had grown very attached to Humansville, we decided that it needed to be performed as part of the DSG Play Festival. Erin Powers, assisted by Hayley Kapnias and Megan Searle took on the task of bringing Humansville to life on stage. The play deals with the issues faced by the community of a small town. The return of Rev Dave threatens to destroy the town as old animosity, prejudice and greed rear their ugly heads. The audience are left to question whether the small town will survive the sad turn of events and endeavour to be kinder people. The play was beautifully staged in the Lila Strong Hall and the performers
gave credible performances as the array of interesting folk who inhabit Humansville. 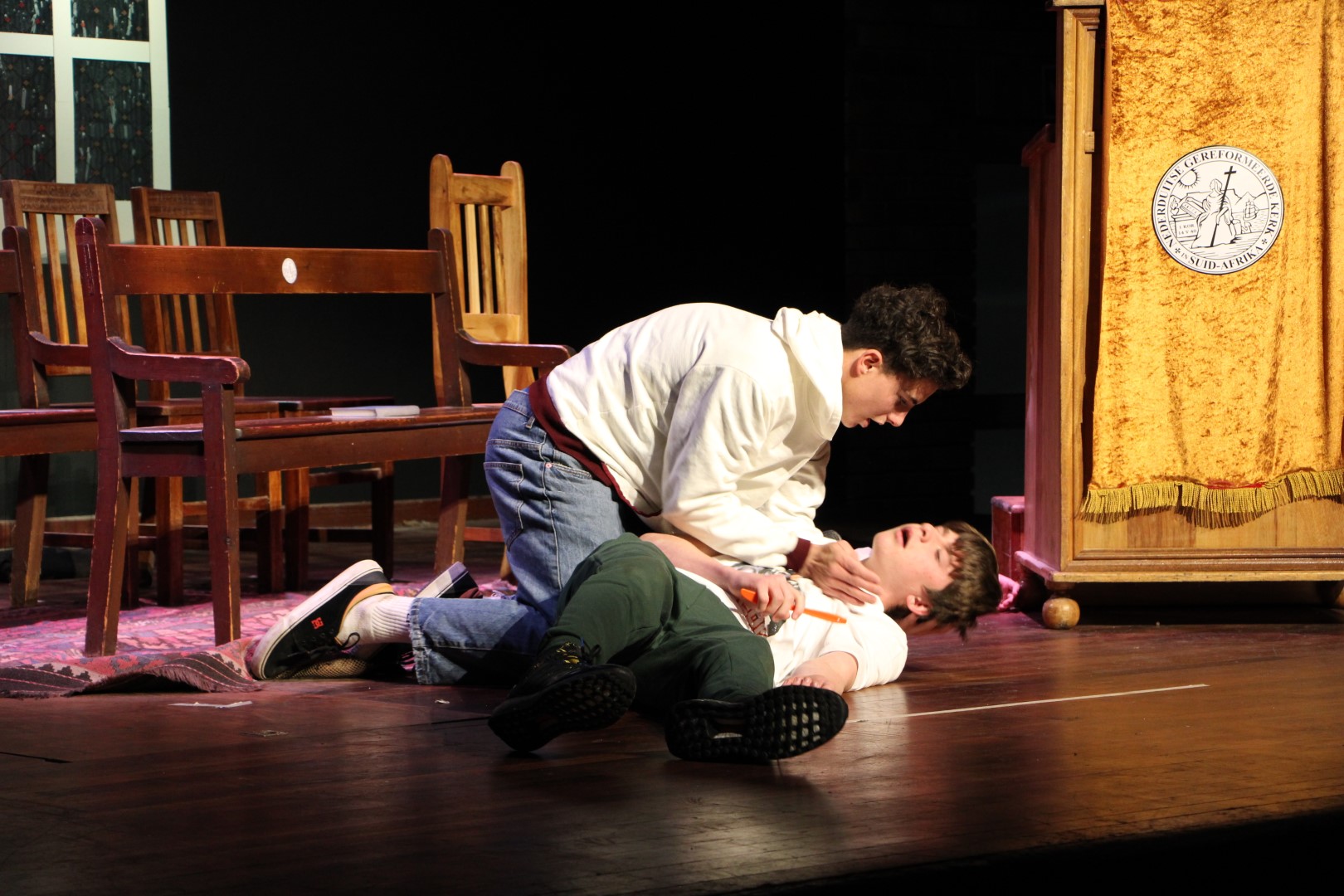 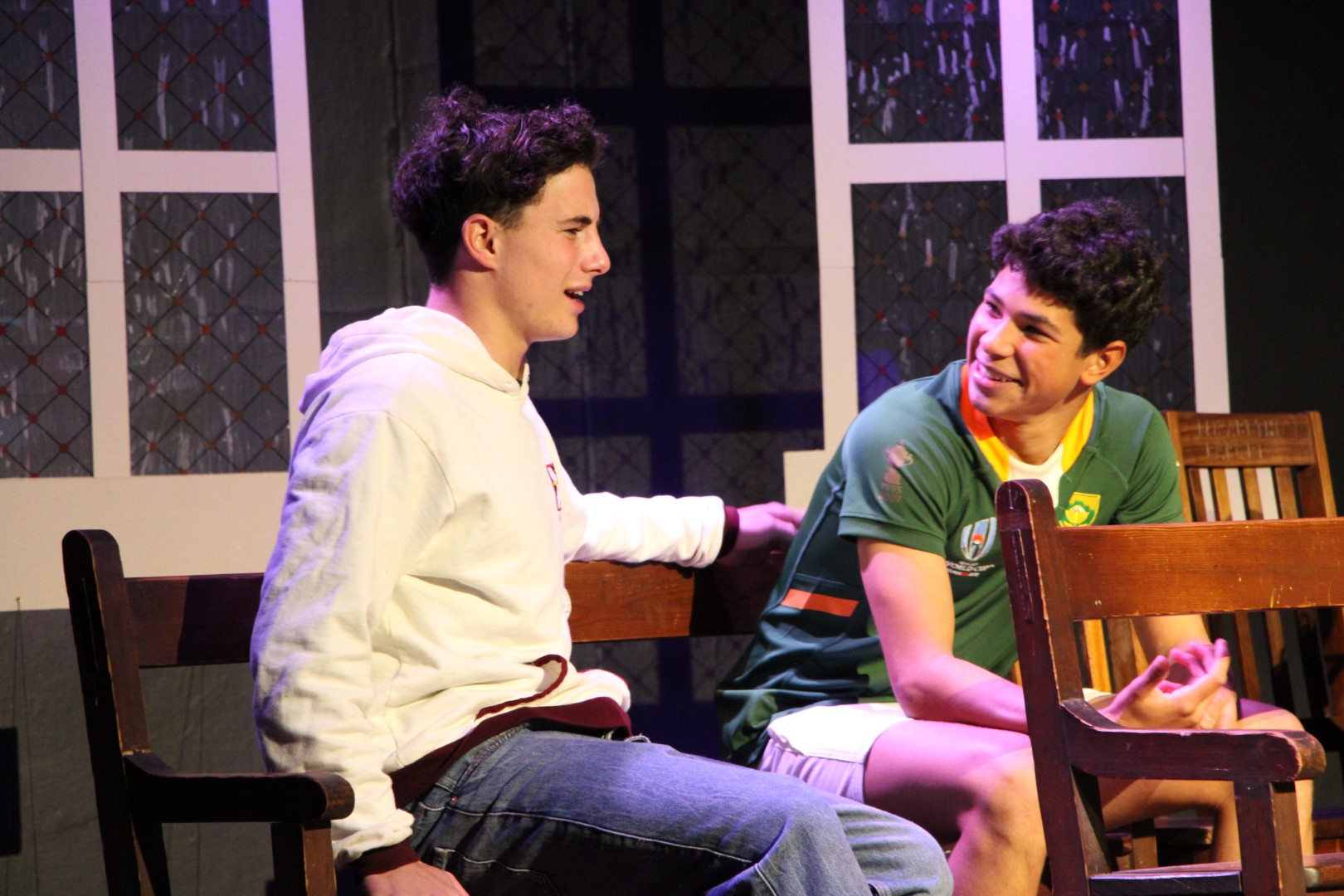 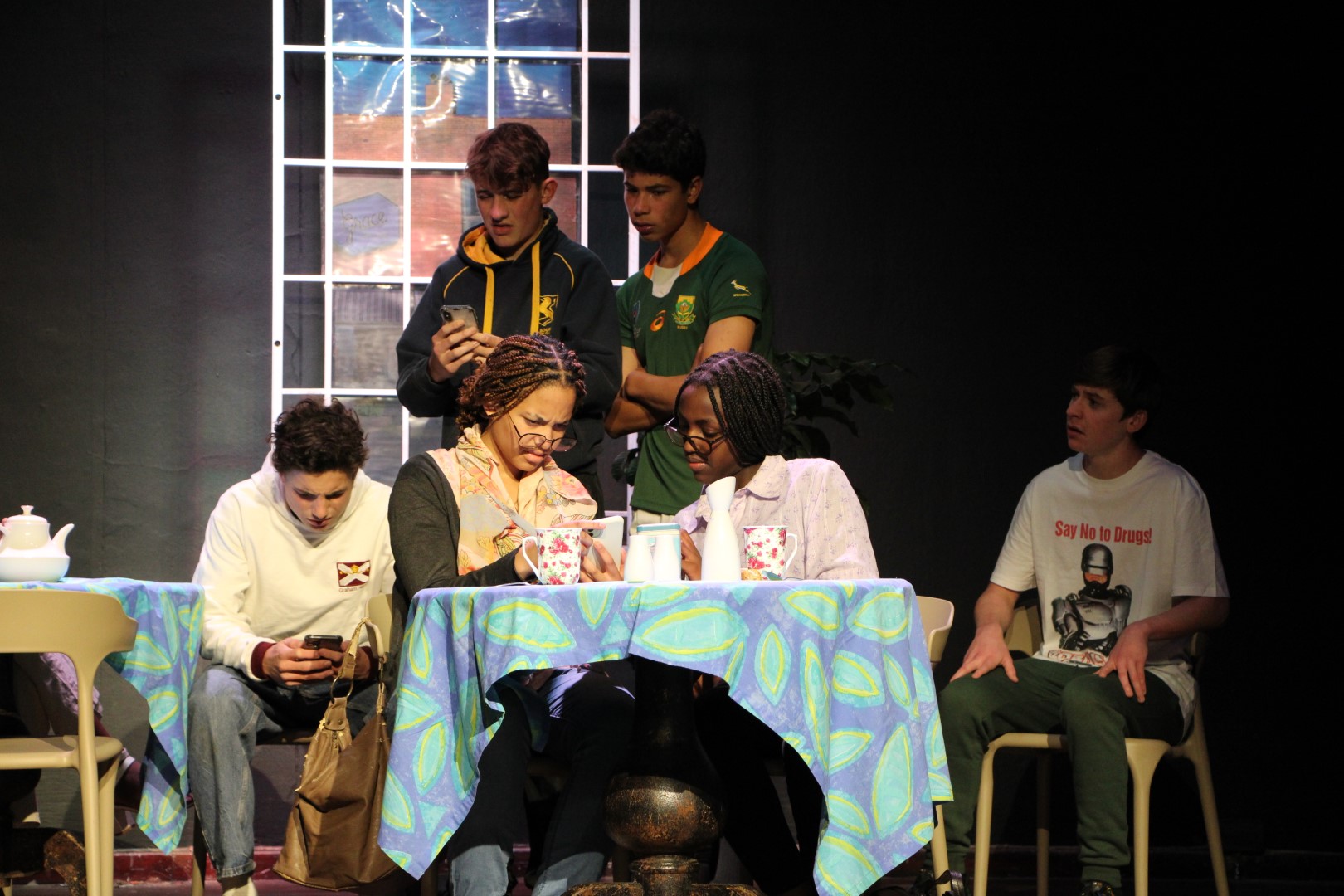 The second play featured at the festival was Still Dawn, written by theatre students at Hill Country Christian School in Austin, Texas, as part of the TheatreLink programme. Still Dawn takes place on an island where a group of people from different time periods have been flung together and have managed to become self- sufficient. Their life on the island is threatened by fire and food shortages and a battle ensues between those wanting to leave and those wanting to stay. Competently directed by Scott Ritchie, the play came to life on a set complete with beach sand and the sound of waves lapping at the shore. The production was live streamed on 3 June to enable the student writers in Texas to view their play. 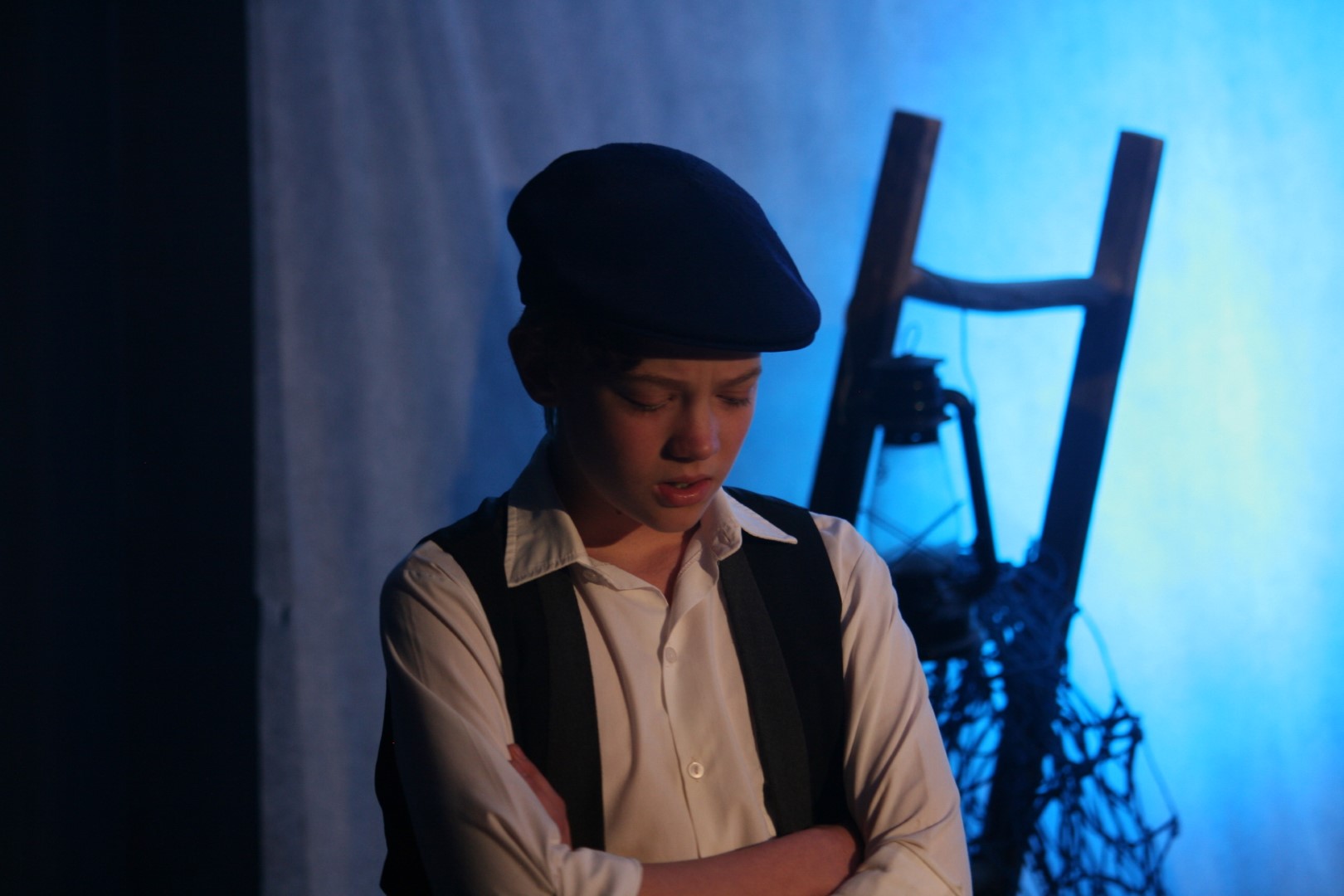 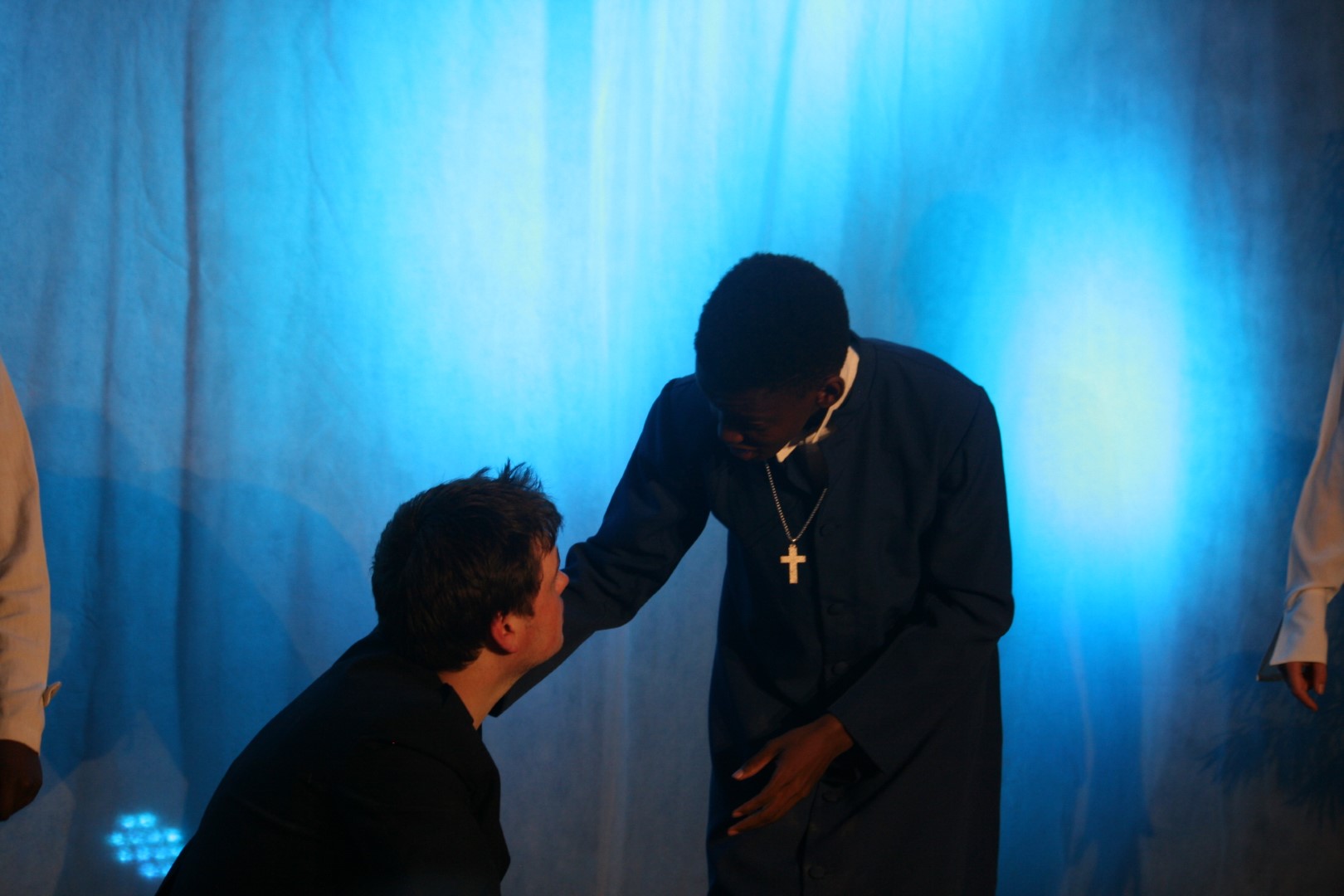 The third play, Sainthood, set at St Gabriel’s School for Boys, explores how five boys confront the culture around the ‘Saints experience’; which include attitudes towards wealth, privilege and influence. The play unravels the threads of violence and its relationship to race, sexuality, mental health and identity under the patronage of masculinity and tradition. The play demands a physical style of performance with the emphasis on the performers’ voices and bodies rather than costume, set and props. The five performers worked incredibly hard, directed by Sbonga Nduli and Keira Ocharo, and assisted by Ms Megan Knowles to realise this challenging style of performance. The production was a triumph and once word got around, audience members lined up to get in to the venue. 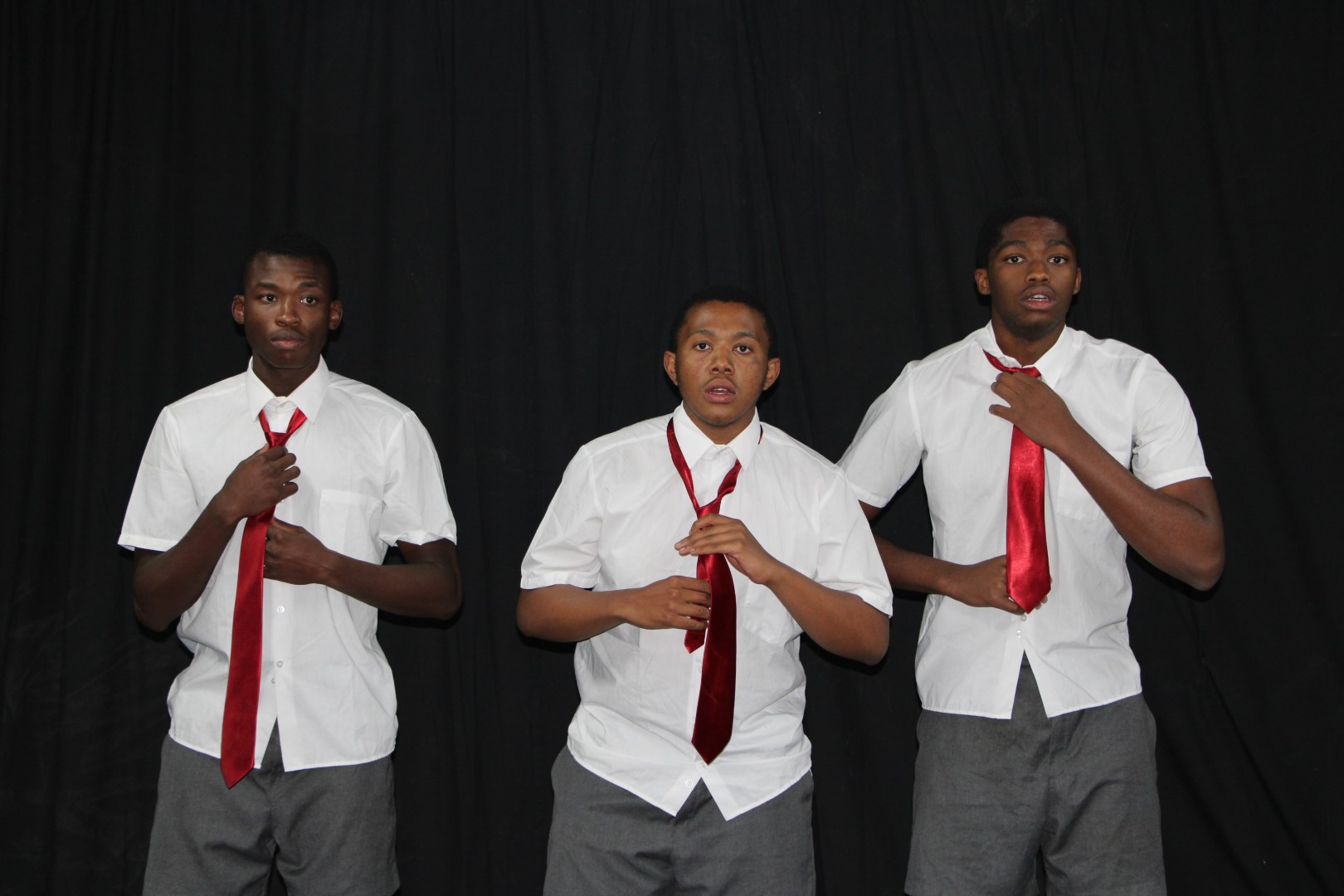 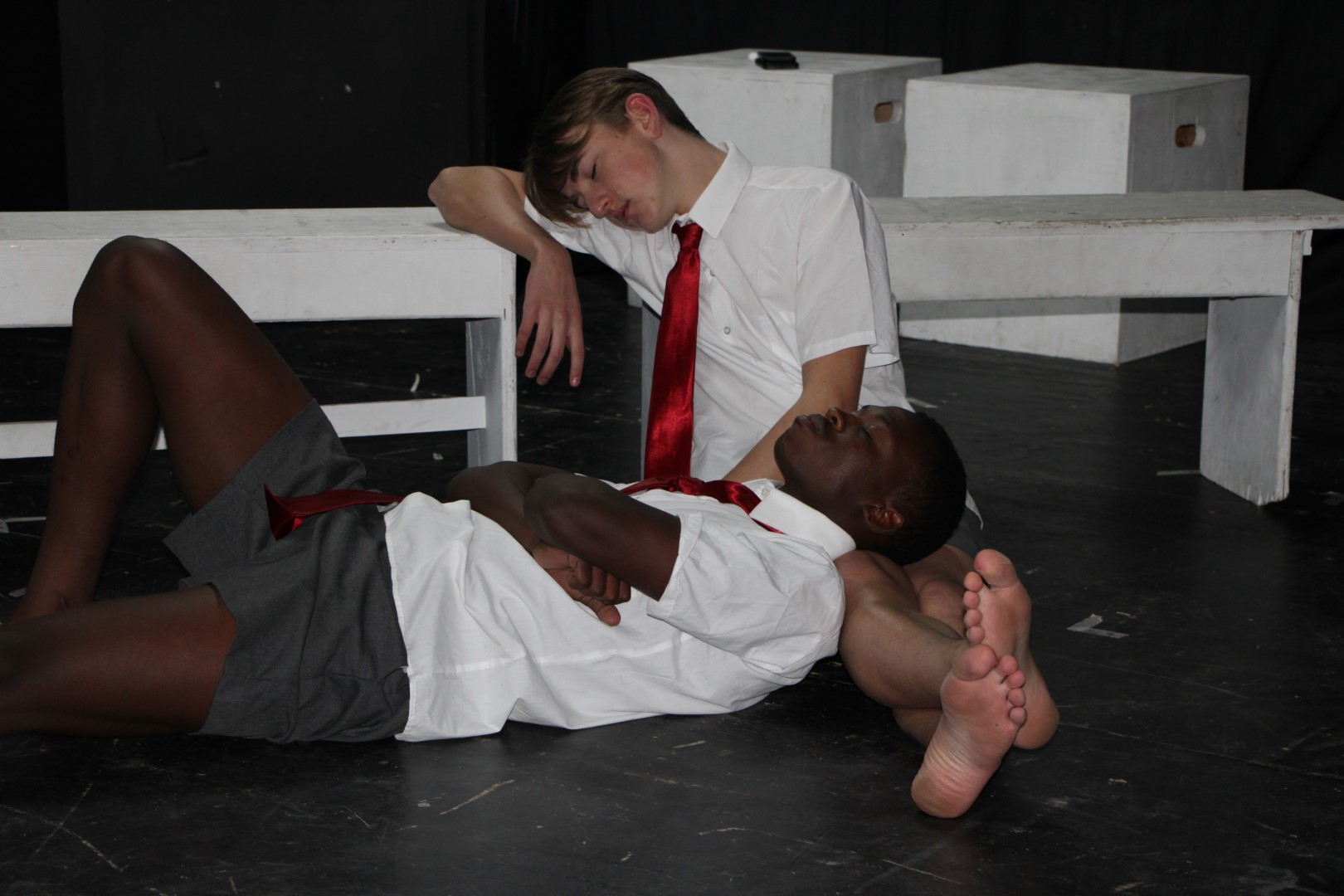 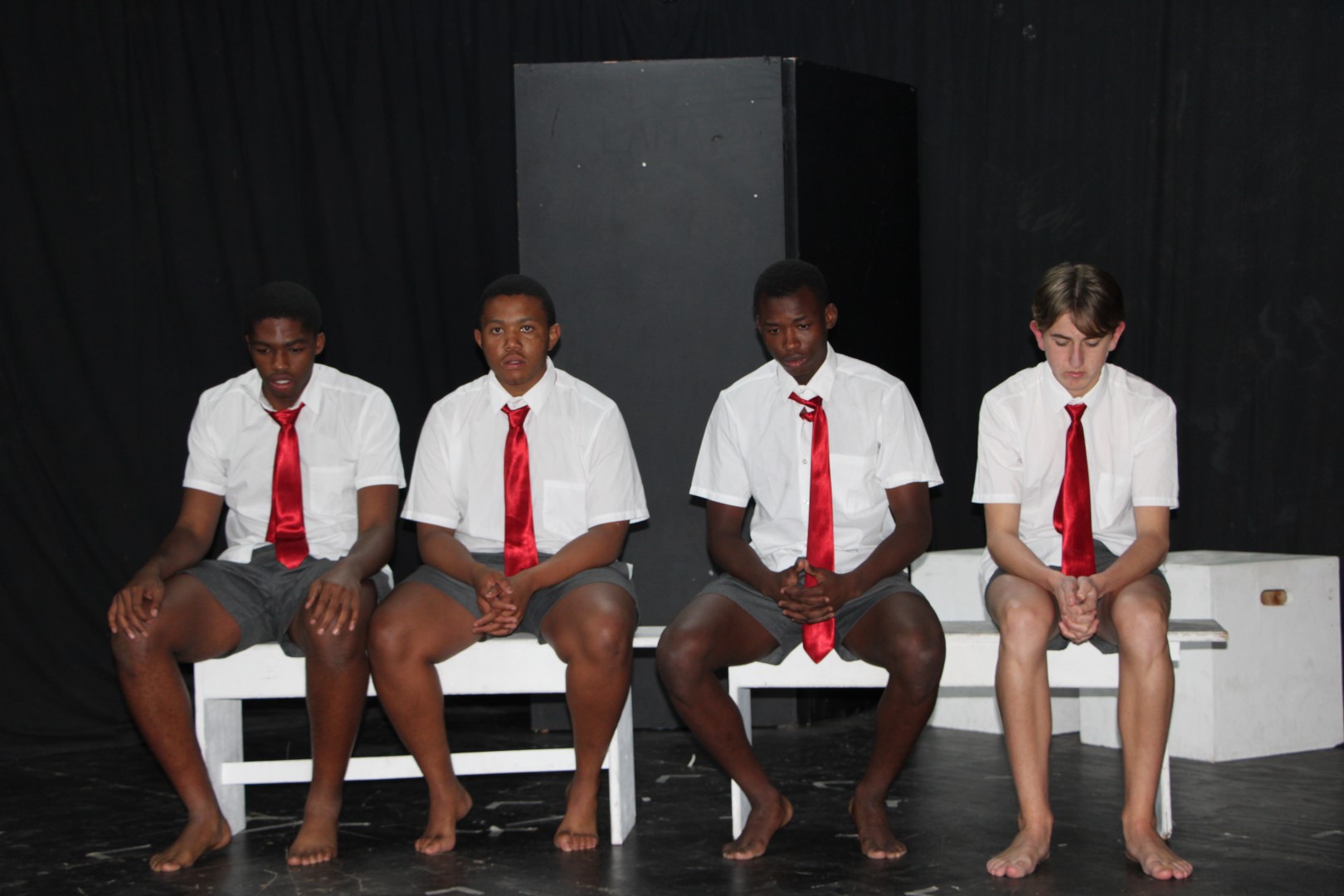 The final play on offer was Jo’obo Theatre, featuring four homeless people who take refuge in an abandoned theatre in Johannesburg. The play reveals these rather eccentric characters and their daily struggle for survival in a tender, yet humorous manner. The set design was a joyful mix of old theatre paraphernalia and the performers were outstanding as down and out, yet delightfully sincere and entertaining characters. 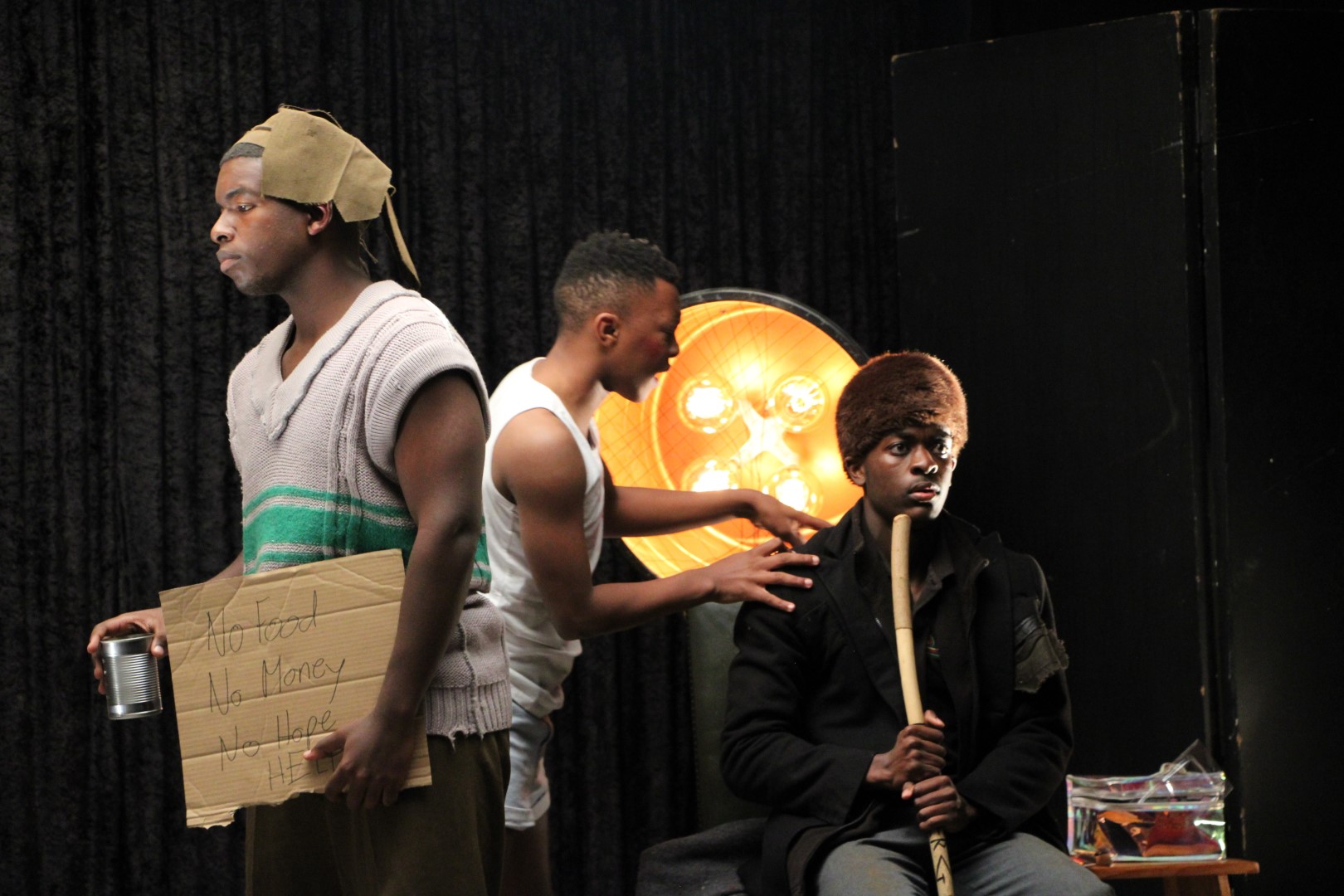 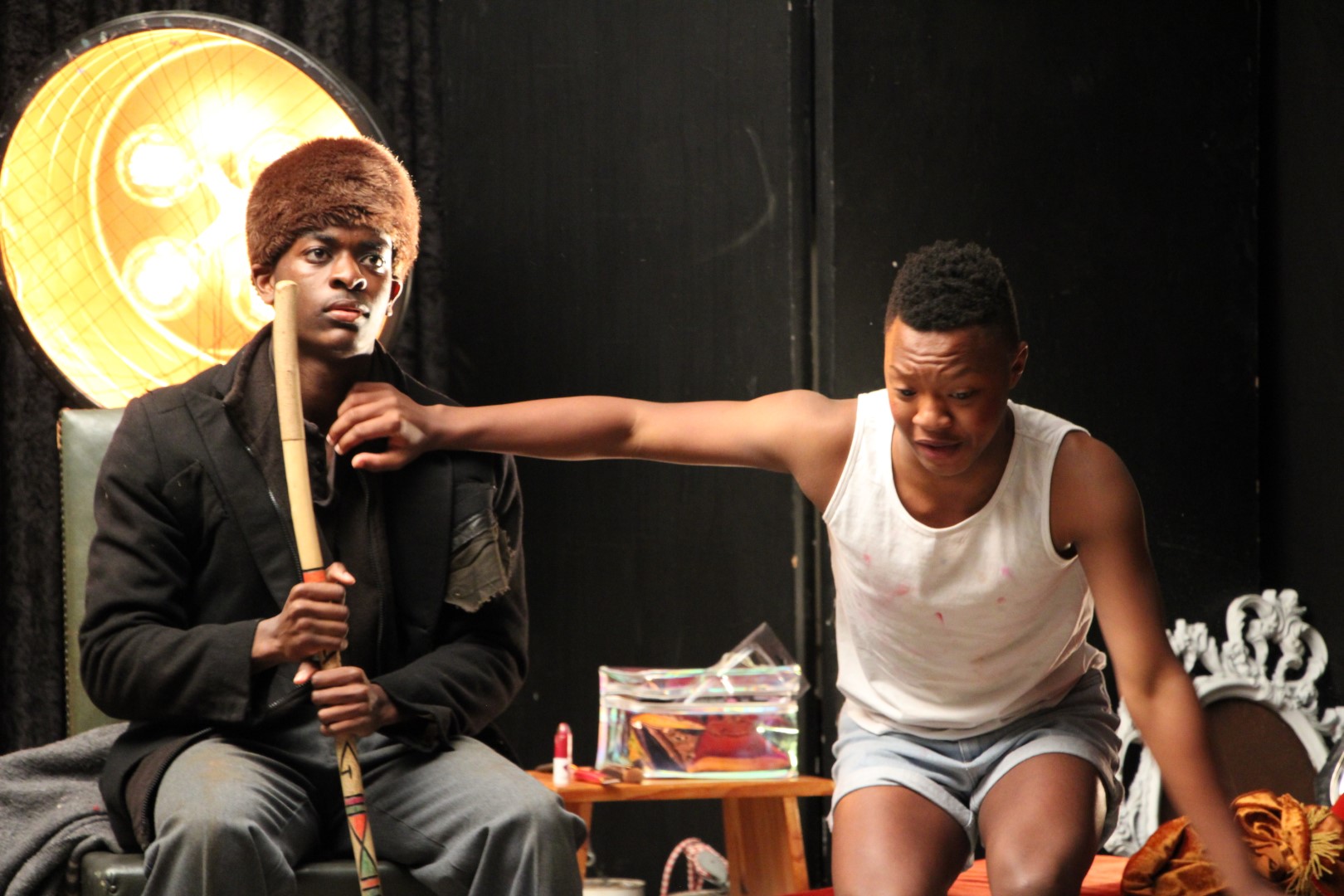 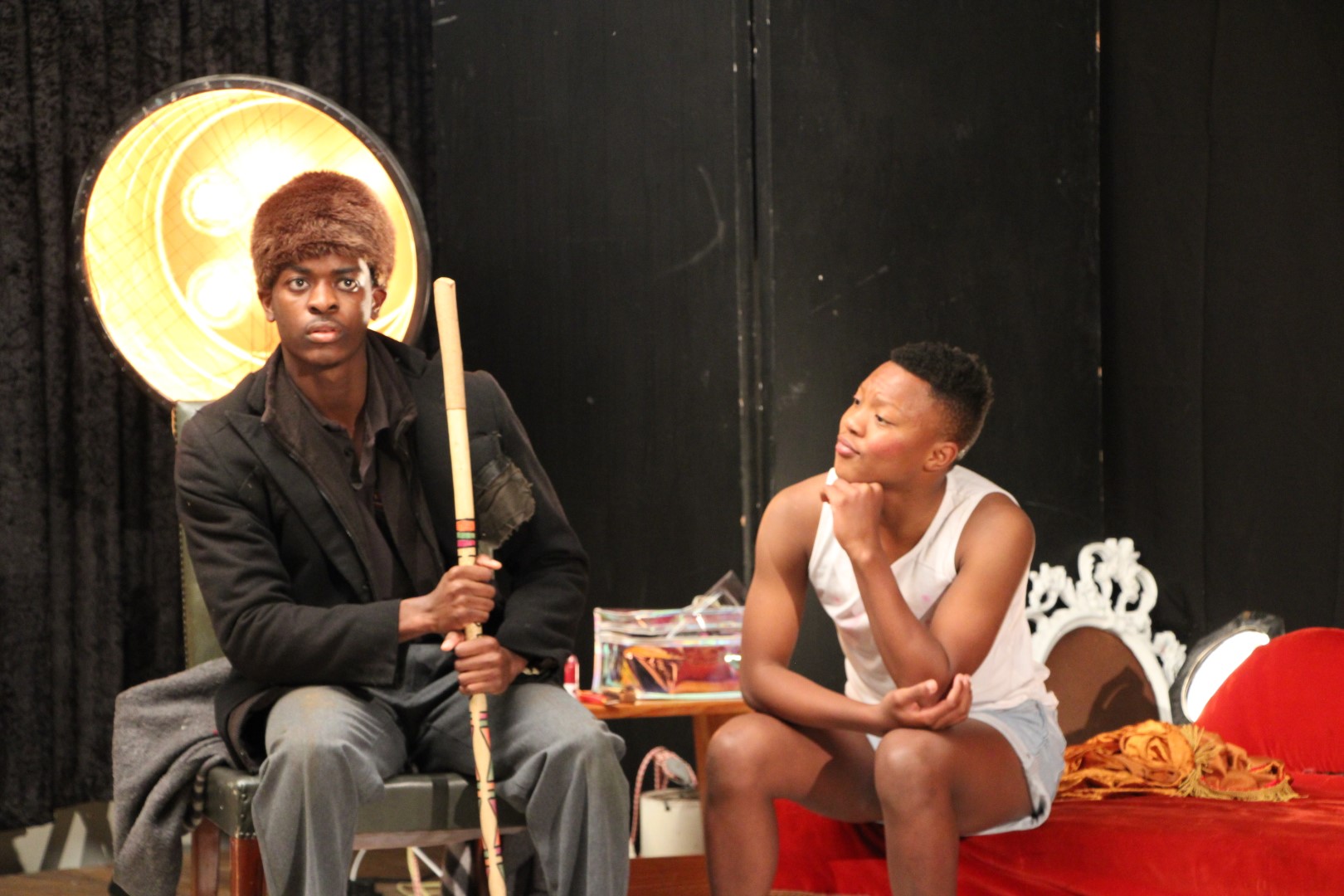 Adding to the festival atmosphere was the use of a different venue for each play. The recently completed Little Box Studio is a welcome addition to the Drama Department facilities. The empty space provides options such as rehearsal space and as well as being an appropriate space to film drama practical pieces. Setting up four venues, complete with lighting, sound and cameras is no small feat and Mr Zane Brown and his Event’s Squad are commended and thanked for their contribution to the success of the festival.

Congratulations to the directors, the casts and the people behind the scenes for all the hard work that went into making the DSG Play Festival a great success.